Home
Stocks
Jeff Reeves’s Strength in Numbers: Interest rates are rising. Here are five strategies to help you prepare for a new reality in the markets
Prev Article Next Article
This post was originally published on this site 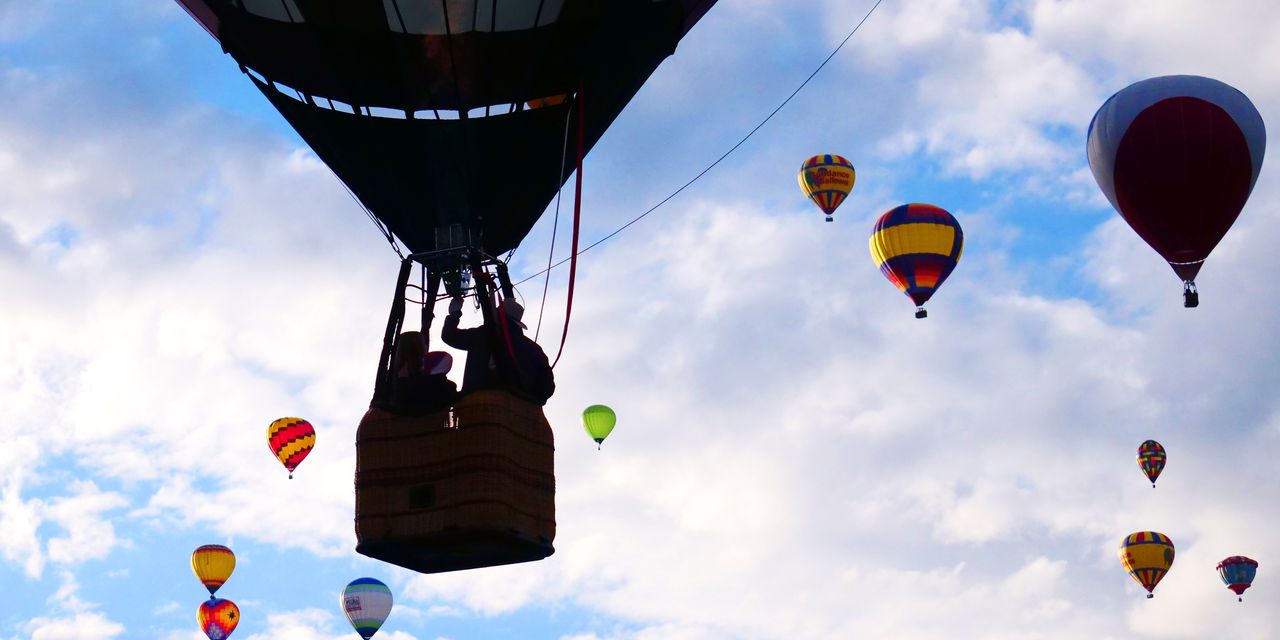 One of the biggest stories investors are watching is how the Federal Reserve will act to alter interest rates.

Unemployment is low, inflation is high, and a Fed economic projection released at the end of last year suggests benchmark rates might sit at 2.1% by the end of 2024.

To be clear, this isn’t the 10-year Treasury bond
TMUBMUSD10Y,

rate — this is the fed funds rate, which currently is a rock-bottom range of zero to 0.25%. So if the key foundational rate is 2.1%, just imagine where corporate bonds, mortgages and credit card rates will be.

Of course, rising rates should never be seen as a death knell for the economy. For those who remember, the current rate environment was achieved in large part because of crisis-era cuts back in 2008 and 2009. If we do see a 2.1% fed funds rate, many may actually see it as a sign that America is on the right track again.

It’s an open question how fast we’ll get there, however, or if we’ll get there at all. A resurgent Covid-19 pandemic and labor market issues are just two of the most obvious challenges to a thriving U.S. economy. Still, given recent movement in rates, it’s worth considering how to reposition your portfolio to protect yourself if and when this shift happens.

Already, 2022 is shaping up to be a tremendous year for financial stocks as many big names in the sector have started the New Year with their best performance in more than a decade.

Across the first five trading days of the year last week, Citigroup
C,

surged 9% and Bank of America
BAC,

There’s no complicated reason as to why financial firms are a good play in a rising interest-rate environment. Simply put, they increase the rates they charge for loans they extend to others and their margin on lending improves.

The icing on the cake is that many of these firms have borrowed capital from Wall Street via major bond offerings at a lower rate based on market conditions in prior years. Take Bank of America, which used a favorable environment to lock in a $3.25 billion bond sale in October at only 1 percentage point above Treasuries at the time.

There are many ways to play this trend, either through individual stocks or ETFs. But one of the most straightforward methods is to play smaller, regional banks that are very much lenders rather than complex global financial players. The SPDR S&P Regional Banking ETF
KRE,

is a great option if this strategy appeals to you, as it is well-established with $6 billion in assets and diversified across 140 small and mid-sized players including Regions and M&T. And unlike some market-cap weighted funds, no single position is worth more than 2% or so of the portfolio at present, as it regularly rebalances to spread your cash around these holdings.

KRE is up 9% year-to-date, thanks in part to the anticipation of rising rates, and could continue to outperform if this trend persists.

There are plenty of big-picture concerns for tech stocks, whether it’s the copious brand tarnish in the sector or recent anti-trust movements around the globe. But one more material concern for tech stocks large and small should be the rising rate environment and its affect on their books.

Almost all major tech companies are characterized by a premium share price today based on the potential of future profits. However, rising rates naturally mean future profits are worth less today than they once were — and Wall Street is less eager to pay nosebleed valuations based on where a company will theoretically be in a year or two.

Furthermore, rising rates are in many ways a good sign for the broader economy as it means businesses and consumers across the board are doing better and can support this shift. That means less motivation for investors to plow their cash into start-ups disrupting old business models and more motivation to look at traditional value plays that may not have a unique value proposition other than simply riding rising global demand. This is particularly true for large and mature companies deep in their life cycles.

is up about 5% in the past three months or so, trillion-dollar tech darlings Meta Platforms
FB,

are both down about 4%. Meanwhile, top performers in the S&P 500 over the same period include discount retailer Dollar Tree
DLTR,

There are plenty of other headlines moving these stocks, but the risk of a shift from growth to value investing is real — and particularly if you’re concerned about some of these specific challenges to your favorite tech stocks, the unfavorable dynamics of a rising-rate environment should give you pause.

Be careful with high-yield REITs

Real estate investment trusts, or REITs, have been all the rage over the past few years. Part of that is because back in 2016, real estate was broken out into its own high-level sector in the S&P 500 to give this category more independence and prominence. But the biggest motivator has been chronically low rates since the 2008 financial crisis that have driven yield-hungry investors toward this category of stock.

Of course, those yields become less attractive to many investors when they can get bigger paydays from bond markets amid rising rates. And if enough investors rotate out of this category and back into traditional fixed-income markets, it could spell trouble.

The problem isn’t just that investors will move on to greener pastures, either. REITs often have more complex balance sheets than the typical publicly traded stock as a result of this unique structure, including significant loans to fund their real estate empires. That means borrowing costs are huge factors — and as rates rise, that financing will become harder to come by and limit future growth options. Furthermore, rates that have not locked in attractive long-term rates will see more capital allocated to debt service instead of normal operations or dividend payments.

If you want a more concrete example of these headwinds, consider this: From mid-2016 to mid-2018, the 10-year Treasury bond saw rates rise significantly from a low of about 1.4% to a high of about 2.8%. The S&P 500 rose about 30% in that period, while the Vanguard Real Estate Index Fund ETF
VNQ,

In a low-rate environment when REITs offered huge yields and stability, many investors dove in headfirst. That could be a dangerous game to play if history repeats itself and rates rise significantly in the next year or two.

For investors looking to fixed-income markets, rising rates can be very problematic because there is an inverse relationship between yields and bond prices — or in plain English, bond funds lose value when interest rates rise.

The reason for this is fairy straightforward, as a rising-rate environment means bonds issued in the future will naturally have a higher rate of return and are therefore more attractive. If you were an investor holding these bonds for 10 or 20 years, which would you rather have — one issued in 2021 yielding 3% or one issued in 2022 that pays 4%? Because of this dynamic, older bonds are generally discounted to make up for their smaller yield.

Of course, if you own individual bonds and hold to maturity, this isn’t an issue; unless the borrower defaults, you’ll get paid back precisely on the agreed-upon terms when you bought the bond. But the vast majority of investors hold bonds via mutual fund or ETF, and nearly all of these bond funds trade in and out of positions. That means every time rates rise, the fund managers sell into an unfavorable market as they tweak their portfolio mix.

So how can you mitigate this risk? One simple way is to rely on bonds that have shorter duration — that is, debts that come due in a couple years or months instead of a few decades. After all, the farther into the future you go, the less certainty there is about interest rates, and longer-dated bonds are more sensitive to rate risks.

There are a host of short-term bond funds out there, but the Vanguard Short-Term Corporate Bond ETF
VCSH,

is a good example of what to look for. It is a $50 billion fund with almost 2,300 holdings and an average duration of just 2.7 years. And it threads the needle nicely with an investment-grade focus on corporate bonds, cutting out low-yielding government bonds and avoiding the risky but higher-yield “junk” out there.

The result is a fund that has declined only about 2% in the past 12 months, much less than longer-dated funds like the popular iShares 20+ Year Treasury Bond ETF
TLT,

that has declined more than 6% in the past year. Furthermore, VCSH offers a yield of about 1.4% at present — slightly higher than the S&P 500.

Of course, it’s obvious that any decline in principal value — even just a few percentage points — is hardly an attractive proposition for many folks. So one way to either mitigate these headwinds in bond markets or cash in with a short-term tactical trade is to play “inverse” funds that short the bond market.

It should hopefully go without saying that this is a risky strategy, but I’ll say it anyway: This is a risky strategy! Plenty of research has shown that it does not pay to be bearish for the long term, given that the global economy and U.S. capital markets in particular will always grind higher when you measure in term of years or decades.

That said, you may want to view an inverse fund as a form of insurance against bond declines. Consider the ProShares Short 20+ Year Treasury ETN
TBF,
,
a fund designed to more or less do the opposite of the aforementioned TLT. It has leapt 5% in the first week of 2022 alone, thanks to market dynamics.

The catch is that the fees and complexity of shorting the bond market via a product like TBF does not provide a 1-to-1 return in the opposite direction, particularly over the long term. Specifically, TBF is up under 3% in the past year, while TLT is down 6%.

Still, as a short-term hedge or insurance policy, it is undeniable that these inverse funds can have a purpose. Just beware of the risk.

One last note: There are also “leveraged” inverse funds that aim to deliver two or three times the return in the opposite direction. And, in fact, one of the largest is also tied to the 20-year Treasury market via the $1.5 billion ProShares UltraShort 20+ Year Treasury ETN
TBT,
.
This short Treasury fund is actually up more than 9% year-to-date as long Treasury bond funds have struggled.

But before you dive in, remember that leverage works both ways, and if the market moves away from you, it could get painful in a hurry.