Home
Stocks
The Fast Foodist: Are you ready for the ‘Mount Everest of mac ‘n’ cheese’? Panera Bread has a new sandwich featuring the comfort-food favorite
Prev Article Next Article
This post was originally published on this site 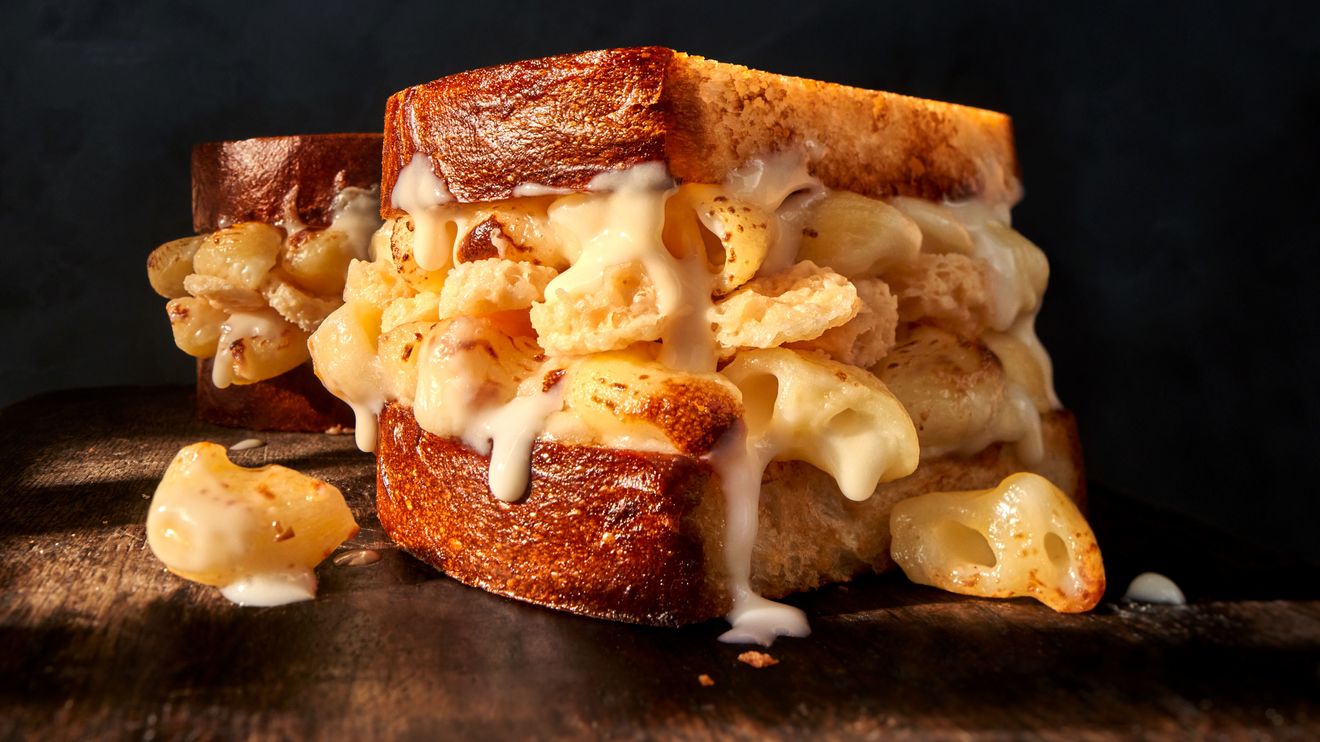 Want some carbs with your carbs?

That’s the essential proposition of Panera Bread’s recently unveiled Grilled Mac & Cheese Sandwich. It’s an offering, priced around $10, that’s pretty much as billed: the all-American dish, but in this case served between two slices of white bread — or, to be more specific, what Panera calls its “thick-sliced country white miche” (miche is a classic rustic style).

Is the whole thing an abomination, a sign that Americans can’t leave a good thing alone and have to absurdly ascend the Mount Everest of mac-and-cheesiness? Or is it the ultimate in carb-loving, comfort-food deliciousness, the proof that sometimes more is, well, more?

The short answer is a little of both.

Panera Bread, a 34-year-old company (once public, now private) that has been a leader in the fast-casual dining movement, knows a thing or two about mac ‘n’ cheese. It introduced its version — a sinfully rich affair that puts to shame even some of the finest homemade preparations — in 2006 and has built something of a product category around it. It introduced a supermarket version, called Panera at Home Mac & Cheese, in 2013. And at its 2,100-plus restaurants (or “bakery cafes”), it added a Broccoli & Cheddar Mac & Cheese to the menu in 2020. The company says it now sells roughly 50 million units of mac ‘n’ cheese products annually at its store locations.

All this paved the way for a mac ‘n’ cheese sandwich. And no doubt, the Panera folks had to have in mind the growing popularity of the comfort-food favorite during the pandemic. (When the world is turned upside down, who doesn’t seek comfort in a bowl of mac ‘n’ cheese, vegans notwithstanding?) Indeed, Americans ordered 836 million servings of the dish at restaurants for the year-long period ending in August, according to market researcher the NPD Group/CREST. That equates to a 5% jump over pre-pandemic annual sales.

Another factor likely driving the sandwich’s creation, says restaurant-industry analyst John Zolidis: the constant need for innovation among fast-food and fast-casual chains. “Novelty is super-important with customers,” he says, noting how Starbucks
SBUX,

has practically built its entire business upon new and seasonal menu items (think the Pumpkin Spice Latte and this year’s new addition to the fall lineup, the apple crisp macchiato).

But when it comes to mac ‘n’ cheese, do we really want it in sandwich form? There’s something I can’t quite stomach about bread and pasta being joined together — it’s truly carb overload (and caloric and sodium overload: the Panera sandwich has 860 calories and 1,650 mg of sodium). And yet, on the two occasions I tried the menu item, I had no trouble devouring it.

Part of that may be because Panera has spent a lot of time tinkering with the recipe — five months, according to the chain — to get it right. To the chain’s credit, I found the filling a somewhat “drier” but still decadent version of Panera’s regular mac ‘n’ cheese, so that it worked nicely between the two slices of bread. Drayton Martin, Panera’s vice president of brand building, described the sandwich as its own gooey “experience” with a mix of cheeses different from Panera’s bowl recipe.

Panera also tries to provide a degree of texture by including some Parmesan crisps — like a cross between cheese and potato chips — in the filling. I wish the sandwich actually had more of those crisps, because they really give you something to chew on — literally. I also wouldn’t mind seeing the sandwich on crispier bread — the softness of the white miche just serves as a constant reminder of ALL THOSE FREAKING CARBS you’re consuming. But Martin said he believes the bread is the perfect complement, especially since it’s “mild enough to showcase the delicious mac & cheese flavors inside.”

In fairness, no one is forcing you to devour so many carbs (or calories) at Panera. You can find healthier alternatives in Panera salads that somewhat hit the spot, though I thought its Ten Vegetable soup (a mere 100 calories per bowl) is the best way to go healthy at the chain. Conversely, you can double-down on your mac ‘n’ cheese sandwich and pair it with Panera’s new Cinnamon Crunch Latte — a spinoff of the chain’s popular Cinnamon Crunch Bagel. A small version of the drink has 280 calories, but I’ll take this sweetly flavorful creation over a Pumpkin Spice Latte any day.

In the end, I’m not sure Panera has a winner in its mac ‘n’ cheese sandwich, even with the novelty factor. After all, the novelty will wear off over time, whereas the traditional Panera bowl of mac ‘n’ cheese seemingly lives forever. And at 470 calories for a small bowl, it’s a relatively sane indulgence.

Of course, as with Panera’s soups, you can have the chain’s traditional mac ‘n’ cheese served in a bread bowl if you like. I’ll let you be the judge of that carb-loaded item.

The Fast Foodist is a new MarketWatch column that looks at restaurant menu items through a critical and business-minded lens. Send suggestions of products that you think should be critiqued to cpassy@marketwatch.com.