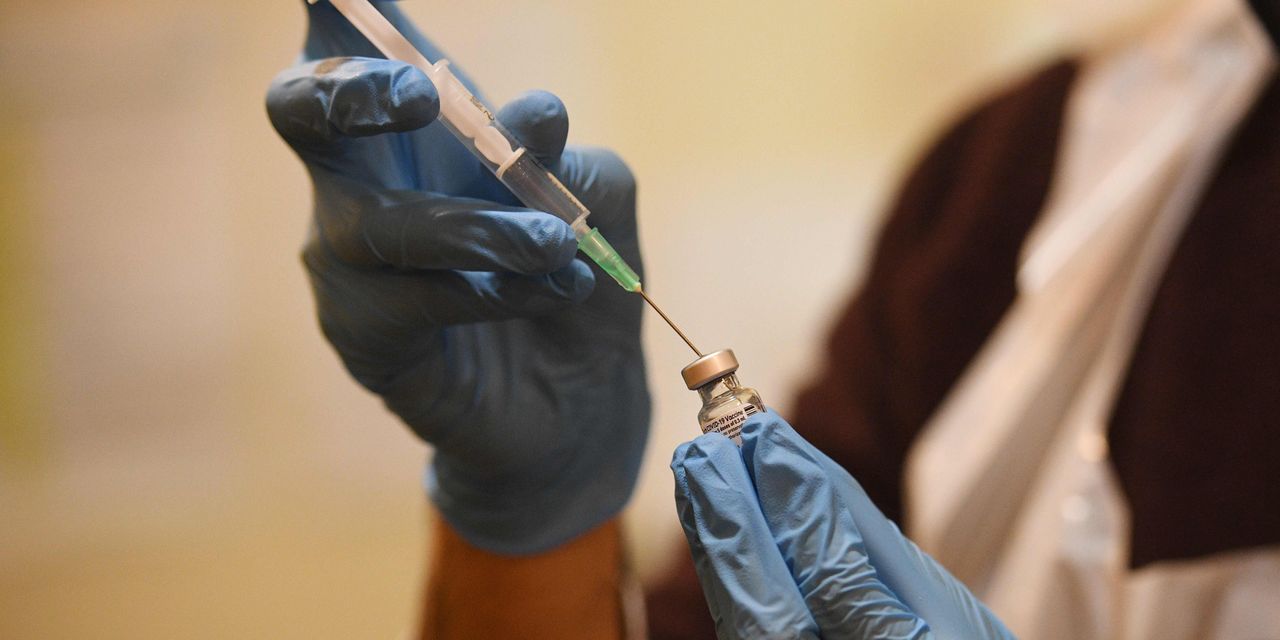 Europe stepped up its fight to secure COVID-19 vaccines on Friday, after Brussels warned that it would use all legal means to block exports of shots if it doesn’t receive the vaccine doses promised by drug companies such as AstraZeneca AZN, -1.50% and Pfizer PFE, +0.03%.

In a letter to four European Union leaders, Charles Michel, president of the European Council, said that the 27-member bloc could adopt “urgent measures” by invoking an emergency provision in the EU treaties” to address the bloc’s coronavirus vaccine shortfall, which is nearing a crisis point.

Several EU member states — including France, Portugal and Spain — said this week that they were suspending their inoculation programs because of vaccine shortages.

If the EU triggers the emergency provision, pharmaceutical companies would need to seek permits to ship vaccines out of the bloc, potentially having an impact on supplies, including those arriving in the U.K.

The move comes as the European Medicines Agency is expected to reach a decision on granting emergency authorization for the use of the AstraZeneca AZN, -0.12% vaccine, developed in collaboration with the University of Oxford, later on Friday.

Read: AstraZeneca vaccine should only be given to under-65s, Germany recommends as EU shortage crisis deepens

AstraZeneca, along with German biotech BioNTech BNTX, +3.80% and its partner Pfizer 0Q1N, -0.44%, have angered the EU after both announcing delivery holdups in recent weeks, citing production issues at European plants. AstraZeneca reportedly told the EU that it would receive 31 million doses in the first quarter, or 60% less than initially agreed.

That prompted the EU to demand that AstraZeneca diverts supplies from the U.K. to the EU. The two sides said they would work together to try to resolve the issue, after high-level crisis talks late Wednesday.

“I support all efforts to resolve the matter with companies through dialogue and negotiation,” Michel wrote in the letter that was quoted by Politico.

“However, if no satisfactory solution can be found, I believe we should explore all options and make use of all legal means and enforcement measures at our disposal under the Treaties,” Michel wrote, adding that this would ensure “effective vaccine production and supply for our population.”

Opinion: Hoarding the COVID vaccines is a losing strategy for rich nations

AstraZeneca Chief Executive Pascal Soriot told Italian newspaper La Repubblica earlier this week that the company wasn’t legally required to deliver to the EU on a precise timetable, because it had only committed to supplying vaccines under a “best-effort” clause.

European Commission President Ursula von der Leyen waded into the row on Friday, when she told German radio that the vaccine contract with AstraZeneca, signed in August for 300 million doses, was “crystal clear” and contained clear delivery amounts for December and the first three quarters of 2021.

Paris became the latest European city to suspend its inoculations because of shortages, with the French health ministry ordering Paris hospitals to stop administering first doses of COVID-19 shots from next week, Reuters reported, citing a source.

U.S. biotech Moderna MRNA, +2.45% said on Friday it will deliver 20% fewer vaccines to Italy than promised, in the week starting Feb. 7.

Portugal’s vaccination plan will be extended by around two months into April, the program leader said on Thursday, with the country set to receive just half the expected doses by March because of delivery delays. That followed Madrid health authorities, who on Wednesday said they have suspended inoculations this week and next, as they run out of shots. A day later, German health minister Jens Spahn warned of ‘10 tough weeks ahead’ ahead for the country as it grapples with supply shortages.

Meanwhile, Germany’s vaccine committee has recommended that the AstraZeneca–Oxford vaccine should only be given to people under the age of 65, citing insufficient data on its efficacy among older people.

The EU has signed contracts with six companies for COVID-19 vaccines, taking its total stockpile to almost 2.3 billion doses. Last week, the Commission secured an extra 300 million doses of the Pfizer–BioNTech COVID-19 vaccine, doubling its number of shots.

The U.K., which has already vaccinated more than 7.1 million of its population, said on Friday that a fourth COVID-19 vaccine could be approved for use in the country within weeks, after a trial conducted in the U.K. showed it was 89% effective in preventing the disease.

The shot developed by biotech Novavax NVAX, +2.16% will be assessed by the Medicines and Healthcare products Regulatory Agency, the government said in a statement. If authorized, the vaccine will be rolled out in the second half of 2021, the government said. It has secured 60 million doses of the jab, which will be made in Stockton-on-Tees in northeast England.

Read: The Novavax vaccine is effective. Now I’m seriously hoping that’s what I was injected with