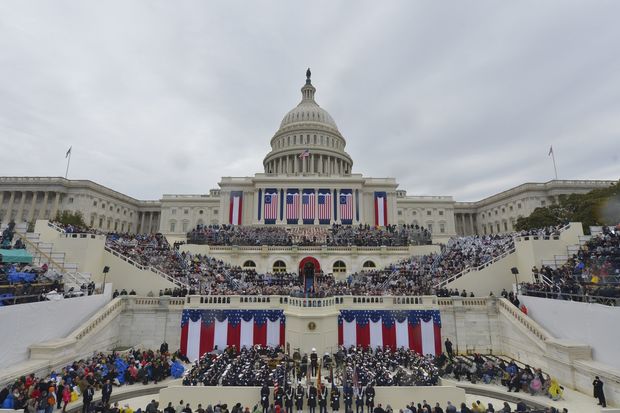 President Donald Trump addresses the crowd after taking the oath of allegiance during his swearing-in ceremony on Jan. 20, 2017, at the U.S. Capitol in Washington, D.C.

Crowd size looks on track to remain a hot topic at the next presidential inauguration, but this time around the incoming Biden administration is talking about limiting in-person attendance due to the COVID-19 pandemic, rather than claiming record numbers.

President-elect Joe Biden and Vice President-elect Kamala Harris are “going to try to have an inauguration that honors the importance and the symbolic meaning of the moment, but also does not result in spread of the disease,” said Ron Klain, the incoming White House chief of staff, in a Sunday interview on ABC’s “This Week” program.

Klain said the Jan. 20 event is “definitely going to have to be changed” and “obviously” is “not going to be the same kind of inauguration we’ve had in the past.”

ABC host George Stephanopoulos pressed Klain on whether that would mean no parades, no big crowds on the National Mall and no large lunch event.

“We ran a very effective and, I think, engaging Democratic convention this year in August, in a way that was safe for the people to participate and watch,” the incoming chief of staff responded. “We’ll have some mix of those techniques, some mix of scaled-down versions of the existing traditions.”

Republican Sen. Roy Blunt of Missouri, who chairs the Joint Congressional Committee on Inaugural Ceremonies, also has signaled that the upcoming events will be smaller due to the coronavirus crisis. Blunt told reporters earlier this month the number of people expected to be inside the official U.S. Capitol ceremony’s perimeter would be down in 2021.

Four years ago, then-White House spokesman Sean Spicer claimed President Donald Trump drew “the largest audience to ever witness an inauguration.” Spicer later said he was referring to audience size when including viewers on TV, phones and other devices.

And see: How anti-Trump protesters also exaggerated crowd size — in one chart

“At 12 noon on Jan. 20, Joe Biden will become the next president of the United States. Everything Donald Trump’s doing now is bad for our democracy, it’s bad for our position, our image in the world, but it’s not going to change what happens here when we get a new president next year,” Klain said.

Also: Did Trump drain the swamp? Watchdog gives him an F, while Biden starts with a C