Home
Stocks
Key Words: ‘You’ve turned this issue of physics into an issue of value or identity’: Former Australian PM Turnbull clashes with News Corp’s Kelly over climate coverage
Prev Article Next Article
This post was originally published on this site 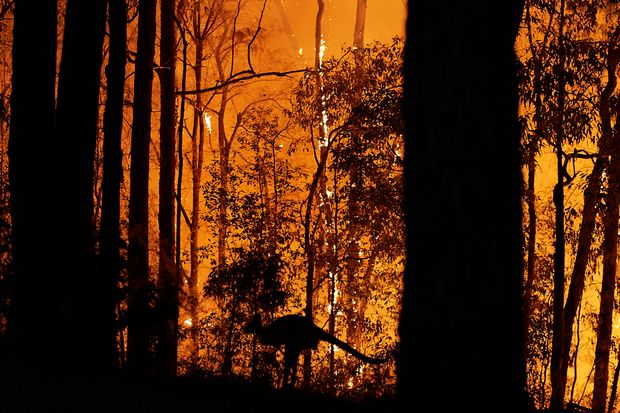 A bushfire burns in late 2019 in Colo Heights, Australia.

The jagged intersection of science, politics and the news media emerged in a frothy exchange between former center-right Australian Prime Minister Malcolm Turnbull and a top editor at News Corp.

The politician told the newsman that a company “campaign on climate [change] denial is just staggering and has done enormous damage to the world, to the global need to address global warming.”

“…[Y]ou’ve turned this issue of physics into an issue of value or identity,” Turnbull said to The Australian’s Editor-at-Large Paul Kelly on ABC’s Q+A program.

Kelly said skepticism is a healthy addition to the discourse, but also that media influence on how policy-makers react to climate change is overestimated.

Turnbull, who was prime minister from 2015-2018, said that sentiment is what has him so riled: the presumption that science can and should always be questioned, even stonewalled.

“…[Y]ou’ve turned something that should be a question of engineering and economics into undiluted ideology and idiocy and we are paying the price in delayed action to address global warming,” Turnbull continued.

Climate change has been flagged for the severity of Australia’s deadly wildfires and has been named as a short-listed priority for U.S. President-elect Joe Biden. China, Japan and the European Union are among the leading nations that have recently announced federal-level commitments to emissions reductions.

“ ‘…[Y]ou’ve turned something that should be a question of engineering and economics into undiluted ideology and idiocy and we are paying the price in delayed action to address global warming.’ ”

Turnbull said 12 million hectares of destroyed Australian land to wildfires during the 2019-20 “Black Summer” was a defining moment, as was News Corp’s coverage of these deadly fires, which he said solely blamed arsonists.

While wildfires can be started by arson, lightening strikes and other triggers, it’s the severity and frequency of devastating blazes during droughts and other extremes that scientists have linked to climate change.

In a statement, News Corp NWSA, +5.71% said Turnbull made a “false assertion” when he said its newspapers blamed the bushfires on arson. “This unsubstantiated statement is blatantly untrue,” the company said. It said the newspapers under its control published 3,335 stories about the bushfires between September 2019 and January 23 this year.

“Only 3.4% mentioned ‘arson’ or ‘arsonists.’ In this same period, news.com.au also published more than 300 bushfire stories, of which only 16 mentioned arson, equivalent to 5%. Not one of these small number of stories stated the bushfires were ‘all the consequence’ of arsonists,” the company said.

The multigenerational Murdoch media family behind News Corp has had its own divisions on climate change and other areas of coverage.

MarketWatch is part of Dow Jones & Co., a property of News Corp.