Home
Stocks
In One Chart: Is Corporate America a going concern? This one chart suggests otherwise
Prev Article Next Article
This post was originally published on this site 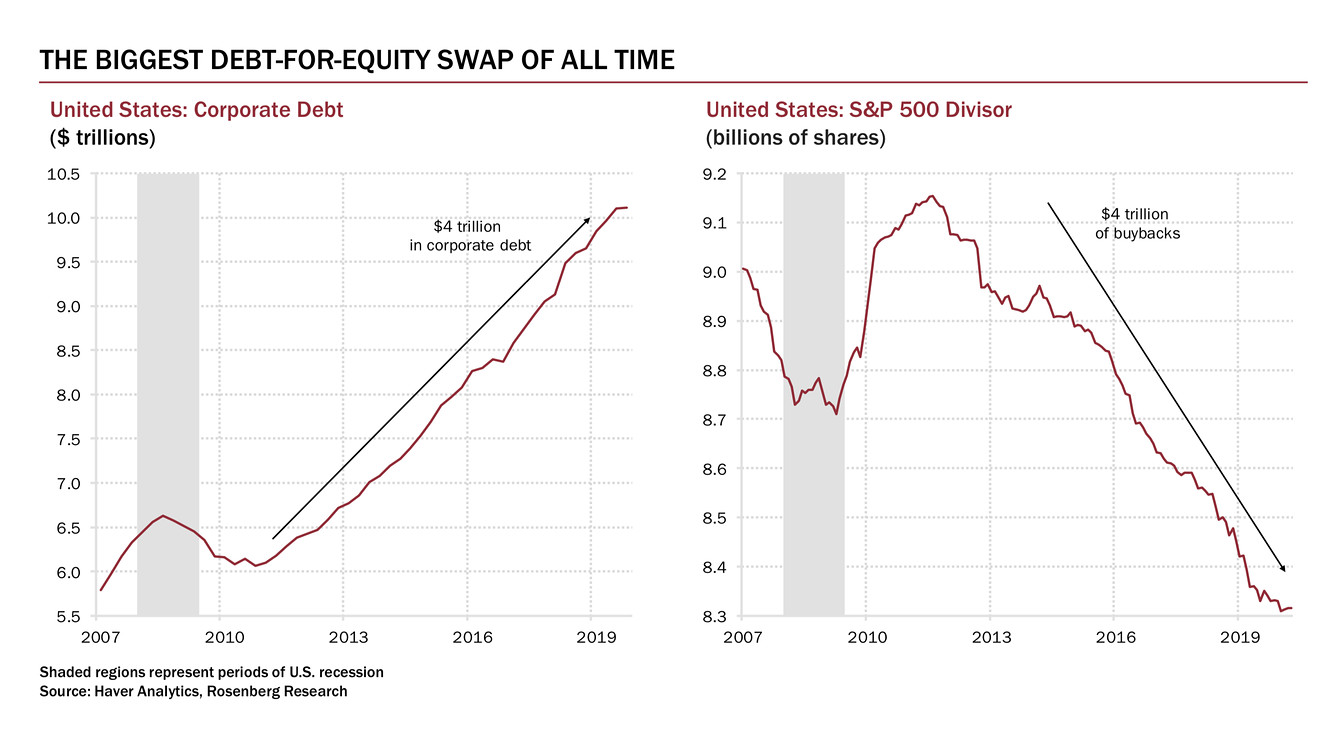 In the aftermath of the 2008 financial crisis, with interest rates near all-time lows, corporations loaded up on debt and used it to buy back their own stock. In an analysis out Tuesday, economist David Rosenberg shows the sheer scale of what that’s looked like over the past decade: a $4 trillion swap of debt for equity.

Share buybacks have been extremely controversial — so much so that many in Congress have worked to make sure any companies who take coronavirus stimulus money can’t use it to repurchase their stock.

Critics say it’s a perversion of the intent of public stimulus: monetary policymakers lower interest rates to entice corporations to borrow money for things that will spark economic activity, like capital spending — not to boost the value of stock. At best, many analysts say, it’s a form of crony capitalism. At worst, it deepens wealth inequality.

Rosenberg’s chart makes another point about this huge shift in the financial system, noting slyly that it’s a “debt for equity” scheme — just on a bigger scale than usual.

Ordinarily, a debt for equity transfer refers to what happens when a troubled company swaps a loan it’s received for an ownership stake in the firm. It’s typically an acknowledgment that the company won’t be able to pay back its debts, and a way of offering some token benefit to its backers. Equity — stock — isn’t as attractive as debt to most investors. In a worst-case scenario, like a bankruptcy, equity holders are likely to be wiped out first, while bondholders usually have something backing the stake they took in the firm.

The analogy isn’t precise in this case. Companies have been issuing more debt, and taking equity shares off the table.

But when things got ugly in the financial markets this spring, the Federal Reserve once again stepped in with a blank check to cushion the blow for corporations. This time, the central bank isn’t just lowering interest rates, it’s buying debt outright, including from companies that have less-than-investment grade ratings.

See: The Fed is going to buy ETFs. What does it mean?

In that sense, Rosenberg’s insinuation that Corporate America made a $4 trillion swap of one type of (now-fungible) asset for another is spot on.