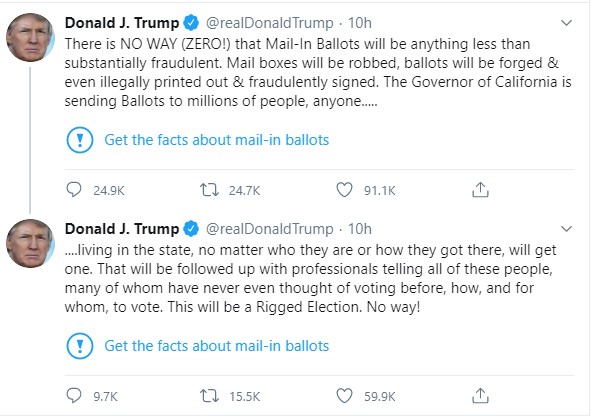 “These tweets contain potentially misleading information about voting processes and have been labeled to provide additional context around mail-in ballots,” a Twitter spokesperson said in a statement. “This decision is in line with the approach we shared earlier this month.”

The claims Trump made are unsubstantiated and, in the case of California ballots, factually wrong. Additionally, Trump and a number of top White House officials have themselves voted through the mail in recent elections.

Clicking on the label added beneath his tweets calls up a page that fact-checks his claims:

Twitter TWTR, +4.26% laid out rules earlier this month about disputed or misleading tweets, saying they will be assessed on a case-by-case basis and only removed if they are harmful.

“We always knew that Silicon Valley would pull out all the stops to obstruct and interfere with President Trump getting his message through to voters. Partnering with the biased fake news media ‘fact checkers’ is only a smoke screen Twitter is using to try to lend their obvious political tactics some false credibility,” Brad Parscale, Trump’s 2020 campaign manager, said in a statement late Tuesday.

Earlier in the day, Twitter said it was “deeply sorry” but refused to remove tweets from Trump that suggested MSNBC host Joe Scarborough murdered a staff member years ago.

Twitter and other social-media platforms have been criticized for their failures to step the spread of misinformation, especially concerning elections and the coronavirus pandemic, despite a number of new policies enacted since Russian interference in the 2016 elections.