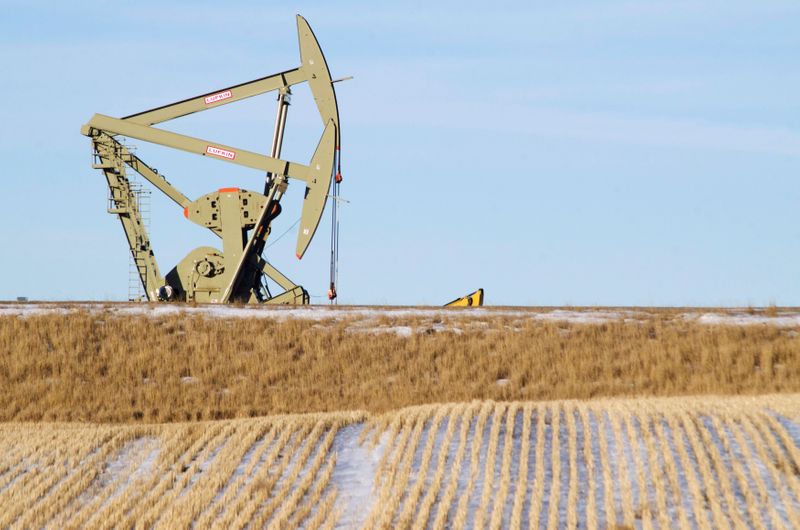 DeWITT COUNTY, Texas (Reuters) – Royalties from oil pumped on Paul Ruckman’s land allowed the South Texas retiree to build a six-bedroom, seven-bathroom vacation home. He had plenty left over, and donated some of it to Helena, Texas, an 1800s ghost town that draws hundreds to historic buildings and gunfight re-enactments.

The worst oil bust in decades has slashed the bounty that flowed to millions of rural Americans like Ruckman, who said his royalty checks have plummeted 70% since January.

“I imagine they’re going to be dropping quite a bit more,” said Ruckman, who owns the land with his brothers.

The bust has erased tens of thousands of jobs in the drilling and service sectors, dried up local tax revenues and charitable largess that flowed along with crude oil to Texas, North Dakota and Oklahoma.

Thanks to modern drilling technology, shale has turned the United States into the world’s No. 1 energy producer, pumping as much as 13 million barrels per day (bpd) before prices crashed. It added about a percentage point to U.S. GDP between 2010 and 2015. Shale-related jobs lifted the employment rate in Texas and North Dakota to a multiple of the national average.

Shale oil fed a global glut. OPEC and allied producers supported prices by cutting output, but this year Saudi Arabia and Russia briefly pumped more. Then fuel demand collapsed during the COVID-19 pandemic. Oil prices are about half January’s level, and many shale producers have shut wells.

U.S. output could fall about 2 million bpd this year and next, Bank of America (NYSE:BAC) has estimated.

(For a graphic on how shale lifted U.S. incomes, click here: https://tmsnrt.rs/3g75QvW)

Ruckman is among 12 million U.S. mineral owners who collect “mailbox money,” or payments for oil and gas extracted from their land. He declined to say how much his property drew, but residents in the heart of Texas’ Eagle Ford shale got bigger royalties than many, able to negotiate richer leases because the region came later to the boom.

Royalties, which can range from 12.5% to 25% of the value of oil and gas pumped, helped revitalize DeWitt and other communities in oil patches across the United States.

John Baen, a Texas college professor who owns mineral rights in South Texas, collected as much as $100,000 a month in recent years. The payments have dwindled to $6,000 and by August, he said, “I’ll be lucky to get anything.”

The average oil-land owner collects about $500 a month, according to the National Association of Royalty Owners, but that will not last. April’s price crash was so sharp, falling at one point into negative territory, that minerals holder Jubilee Royalty Holdings received a $1 check that month from Exxon Mobil (N:XOM).

The shale boom paid off debt from restoring DeWitt’s pink granite and sandstone courthouse and expanding the jail. Oil helped finance the area’s Boys and Girls Club, which provides activities for area children.

It brought jobs that cut DeWitt’s unemployment rate to 2.6% in February from 8% a decade earlier. During that time, oil and gas jobs here roughly doubled, according to the Texas Independent Producers & Royalty Owners Association.

(For a graphic on employment in shale regions, click here: https://tmsnrt.rs/3g9ppn1)

The boom enabled bookkeeper Karen Jensen Zielonka to find work managing a new restaurant in 2015 and later gave her accounting work for Cuero Oilfield Lodging, a nearby “man camp” for transient workers.

“When this first happened they said it would last 25 years,” said Zielonka.

But unemployment rose to 3.5% in March. Cuero Oilfield Lodging camp has been vacant since late March when shale jobs dried up, said manager Tammi Marks, who cut most of her staff.

“We’re doing a lot of praying,” she said.

Officials here and in other U.S. shale patches are bracing for more cuts. The value of DeWitt’s mineral properties could fall this year by half, from $5.3 billion last year, county chief executive Daryl Fowler estimated.

Officials do not expect to reduce county jobs, “but it can happen,” said Fowler.

Oilfield worker Freddie Fuentes sailed through that period, without losing his job. He fears this one will sting much more.

“Right now we have about five weeks of work,” said Fuentes. “After that we’re done.”

Some drillers hope for a turnaround. Oil prices have bounced from the April bottom when U.S. crude ended one day in negative territory. Prices now are about half January’s level.

This year’s crash might be much worse than recent downturns, said Amanda Weinstein, assistant professor of economics at the University of Akron, who has studied shale booms. Young people who lose jobs may “feel like there’s not as much for them in that town anymore,” and leave.

Williston, North Dakota, center of the Bakken shale field, was so devastated by the 1980s bust that it lagged the nation in economic growth until shale started there around 2006, Weinstein said.

At the Helena ghost town, oil royalties donated by Ruckman and others fixed a historic home whose porch had been propped up with a salvaged telephone pole. The historical society had hoped to spruce up the attraction with a visitor’s pavilion and new restrooms, said Trip Ruckman, Paul Ruckman’s cousin.

“Some plans are on hold given the situation,” he said.

(For a graphic on the drop in drilling in DeWitt, click here: https://tmsnrt.rs/3bRgKSW)