Home
Stocks
The Tell: Fund manager who nailed recent bottom calls for ‘virus relief concerts’ where people intentionally get infected
Prev Article Next Article
This post was originally published on this site

Ricky Sandler is ready for America to get back to business. Immediately.

The hedge-fund manager, who oversees some $8 billion in assets at Eminence Capital, just penned an open letter touting herd immunity as the best path forward during the coronavirus pandemic.

“My ultimate goal is to get thought leaders and the rest of the country to start thinking about the choices we have to make, the risks that come with those choices, the uncertainty within each of the choices and the likely negative consequences,” he told MarketWatch. “Let’s be clear. There are currently no good choices in front of us — only better ones and worse ones for the country overall.”

In the letter, he laid out two strategies toward returning to normalcy.

“ ‘May your choices reflect your hope not your fears.’ ”

One approach is to keep strict social-distancing measures enforced. But that, he says, massively impacts our quality of life and puts pressure on the reeling economy all in the hope of keeping infection rates down until some uncertain day in the future when a vaccine is developed.

The other: Herd immunity, much like Sweden. “We protect the vulnerable population and then allow and even encourage the rest of the population to get back to normal life,” he wrote.

Read:Why governments can’t tell the truth about opening up — that many will die

Sandler said that he envisions young and healthy people attending “virus relief concerts” in hopes of getting the virus and then donating the antibodies to be used as a treatment or prophylactic.

Either way, he wants the bickering in the corridors of power to stop.

“A country that lets partisan politics get in the way of such an important decision risks the worst-case outcome,” Sandler explained. “In my mind, the choice is obvious and clearly Plan B for so many reasons, not the least of which is that it is the path least likely to lead to civil unrest.”

He summed up his letter, which was endorsed by about 100 small business owners, with a Nelson Mandela quote: “May your choices reflect your hope not your fears.”

In the meantime, he continues to manage his fund with a big dose of caution after calling the March bottom in a CNBC interview earlier this year.

“We have lost $10 trillion in market cap” due to the steep drop from February highs, he said at the time. “It is so far out of proportion I don’t even want to talk about the numbers.” 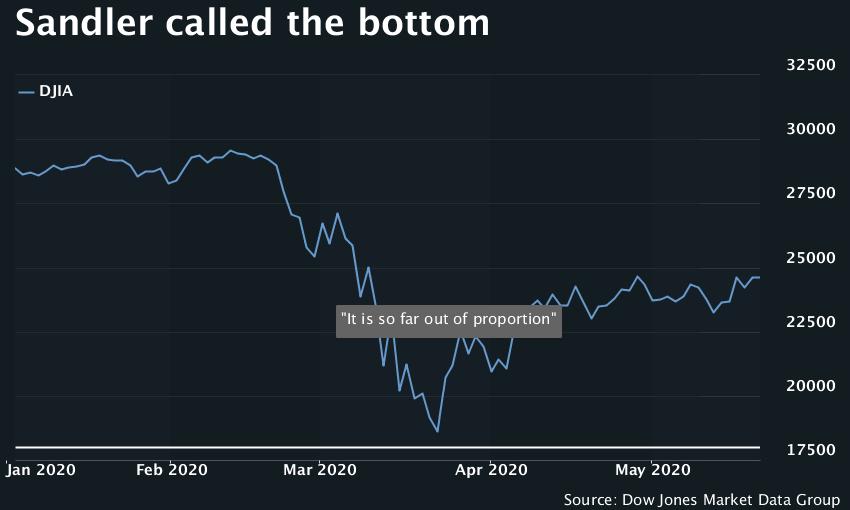 Two months and a nice rebound later, Sandler has changed his tune a bit.

“Tactically, I think the stock market is somewhat overbought up here and is probably due for a correction,” he told MarketWatch. “I do think though that the worst is behind us so I don’t think we retest the lows when and if we have a pull back.”

No signs of stocks being overbought at the moment. In Wednesday’s rebound session, the Dow Jones Industrial Average DJIA, +1.64% was up almost 400 points early. The S&P 500 SPX, +1.82% and Nasdaq Composite COMP, +2.13% were also firmly in the green.