Home
Stocks
In One Chart: The NFL cities with the highest and lowest risk of spreading the coronavirus
Prev Article Next Article
This post was originally published on this site

The National Football League released its schedule for the 2020 season on Thursday night. The league went ahead with scheduling its normal allotment of games amid the coronavirus pandemic.

Jay Glazer, NFL Insider from Fox Sports and The Athletic, has reported, “every indication points toward them trying to have a full season with fans being included.”

The coronavirus has impacted nearly every area of the U.S., but not each area equally. Different NFL cities have varying numbers of COVID-19 cases, and thus varying amounts of risk. 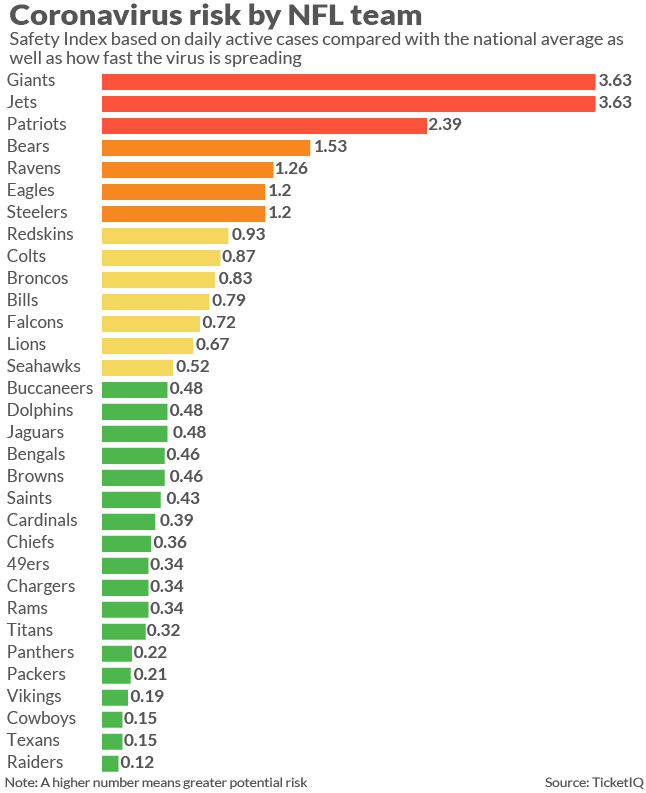 The Safety Index, compiled by TicketIQ, an event ticket search engine that provides ticket-buying options from secondary and primary markets, is drawn from daily active cases from NFL cities compared with the national average and rate of spread of COVID-19. The greater the value, the greater the potential risk. The Safety Index should not be viewed as a recommendation to attend events in any of the locations.

NFL ticket sales in the first 12 hours after the schedule release were up 234% compared with that time period last year, according to ticketing agency SeatGeek. This may be linked to the NFL’s new ticket refund policy, allowing fans to get refunds if games are canceled.

See also: Sun Valley’s ‘summer camp for billionaires’ has been canceled due to coronavirus

According to an NFL memo, the refund policy states that “all clubs will have in place a policy under which, if a game is cancelled, or is played under conditions that prohibit fans from attending, anyone purchasing a ticket directly from the club (i.e., season tickets, group sales and/or partial season plans) will have the option of either receiving a full refund or applying the amount paid toward a future ticket purchase directly from the club.”

Many U.S. states are rolling out reopening plans at different times and for different types of businesses. The presence of fans at events may come down to a state’s policy at the time of the game.

The NFL held its annual league draft online in April, the first time ever the draft was a digital-only event.