Home
Stocks
Market Extra: These Dow charts suggest there could still be many bears waiting to sell
Prev Article Next Article
This post was originally published on this site

When the stock market’s trend is clearly down, the question investors should try to answer isn’t where buying might emerge — because it isn’t likely to last — but where the next wave of selling will come from.

The easiest way to identify the overall trend is by drawing trend lines off major low points. With the Dow Jones Industrial Average DJIA, -1.68% breaking last month below uptrend lines off both the February 2019 and March 2009 lows as the spread of the COVID-19 virus accelerated, it’s pretty safe to say that the long-term uptrend has ended, and that a new downtrend has begun.

The reason the direction of the main trend must first be established is because a tenet of technical analysis is that however convincing countertrend signals might be, they can be easily washed away by the market tide. And the best test of a downtrend isn’t the strength of the bounces, but how potential resistance levels perform when tested.

In the current market environment, the speed and magnitude of the Dow’s selloff had produced a number of signals suggesting an oversold condition. A massive three-day rally off the March 23 closing low of 18,591.93, which included the biggest one-day percentage gain in 87 years, in conjunction with some positive fundamental news, seemed to indicate that the worst may be over. 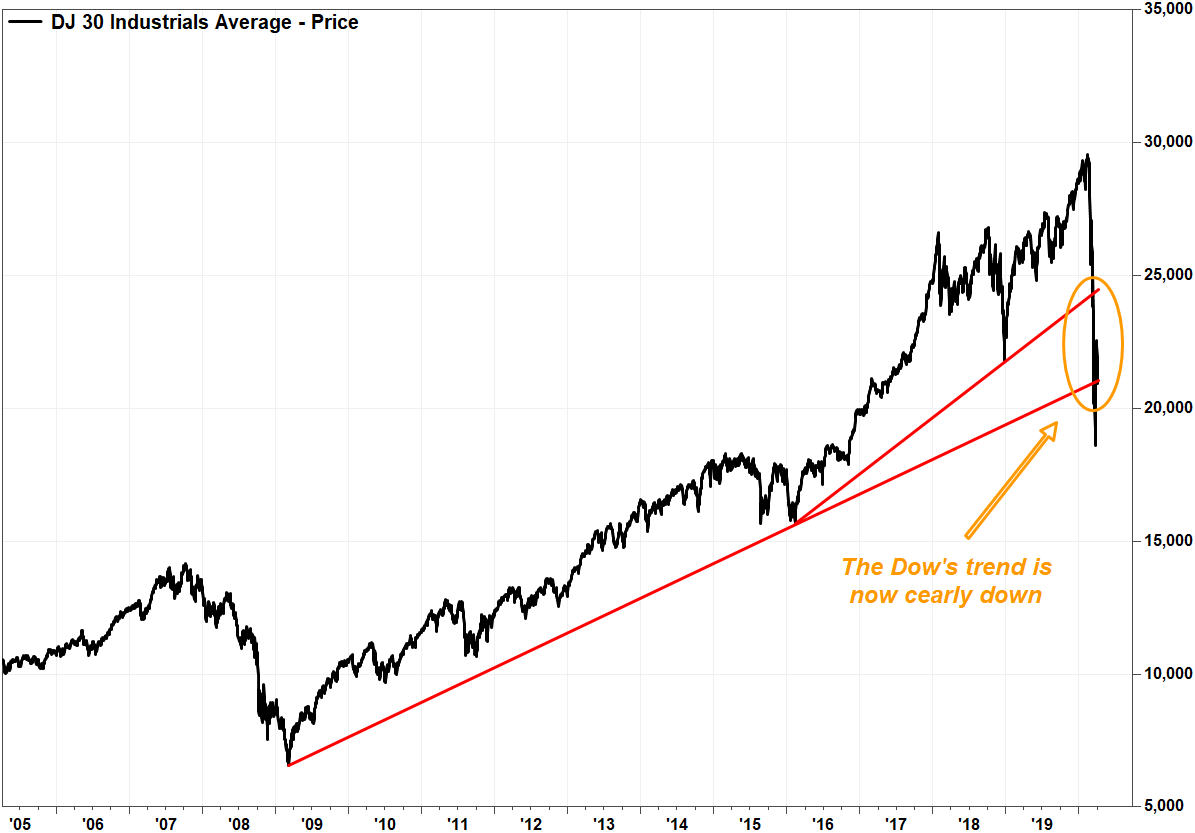 But now with some time to assess the Dow’s technical health since the bounce began, what jumps out is how little an effect it had on the big picture:

•The Relative Strength Index (RSI) couldn’t even make it back to 50.

Many followers of the RSI technical oscillator agree that a decline below 30 indicates an oversold condition, meaning the downtrend has become stretched. But as Connie Brown pointed out in “Technical Analysis for the Trading Professional,” the ability to become oversold is a sign of overall weakness. And once a downtrend has been established, the new range for the RSI will become 10-20 to 50-60. 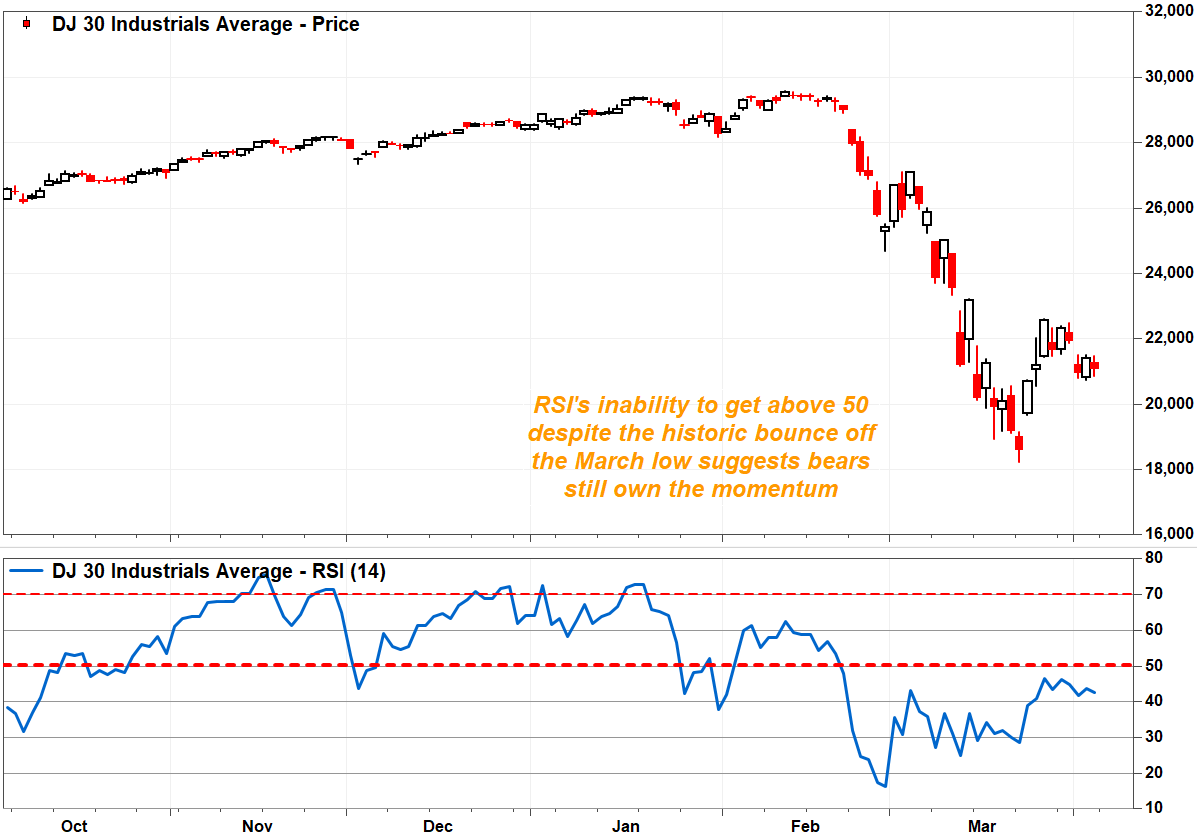 •The Dow didn’t quite make it up to the first key retracement target.

Chart watchers who follow the Fibonacci ratio see 38.2%, 50.0% and 61.8% as the key retracement levels of a significant move, and 23.6% and 76.4% as secondary targets. The idea is that if a rally stays below the 61.8% retracement target of a previous downtrend, the prior trend remains in charge.

Don’t miss: How far can the Dow fall? Here are some key chart points to watch. 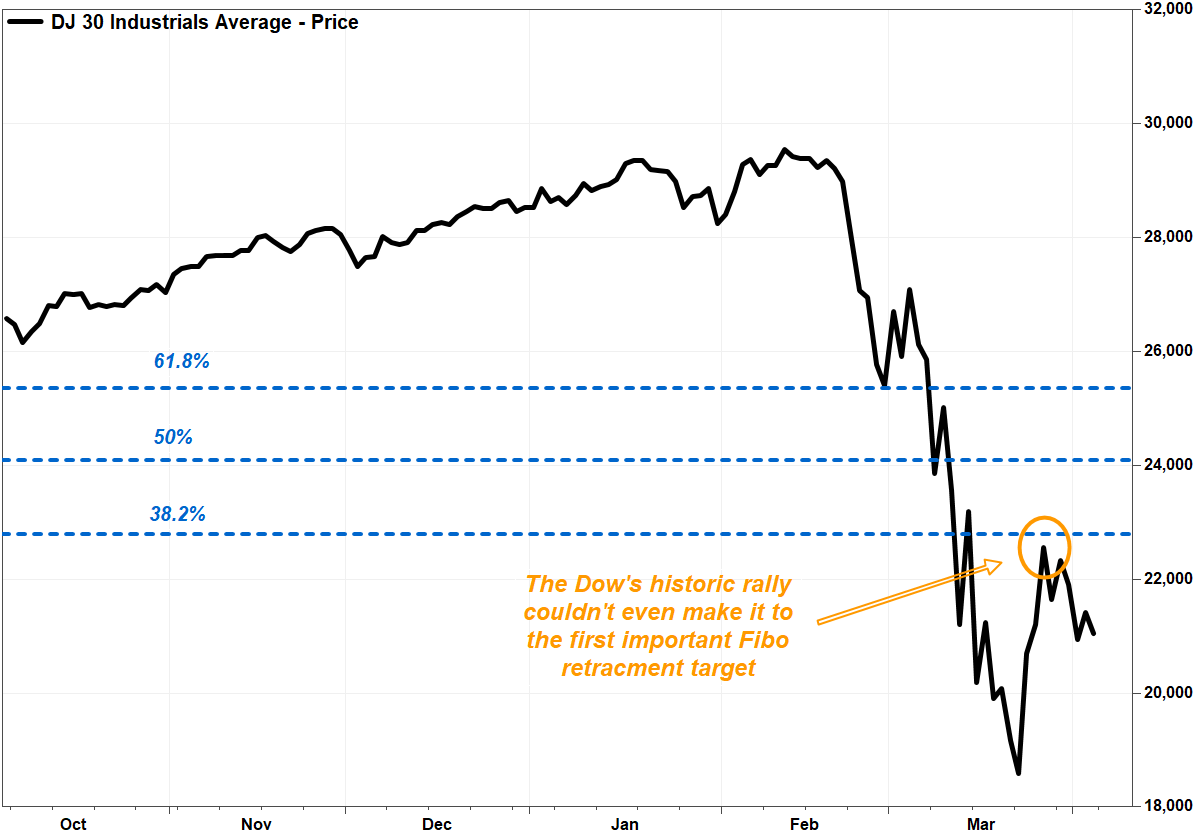 Dow futures YM00, +3.02% surged 2.6% on Sunday evening, suggesting another attempt at a bounce was coming on Monday, amid some glimmer of progress in the fight against the coronavirus pandemic.

With the downtrend established, it’s safe to assume there are a number of investors who are waiting/hoping for a bounce so they can sell at a better level. The good ol’ sell-on-rally mentality.

“Our global equity strategists do not believe the recent relief rally will hold, and argue that such relief bounces are likely to end up faded,” according to J.P. Morgan.

During such volatile times, often the best chart levels are those derived from plain sight, such as previous lows and price gaps — the more obvious the level, the wider the range of investors who may be following them. Previous lows indicate many previous buyers existed, and they may be looking to sell at break-even, while price gaps suggest those who wanted to sell at a certain level but couldn’t won’t pass up a second chance.

What might be most worrisome to bulls is that the latest bounce peaked even before some of the more obvious potential resistance levels were tested. That suggests those looking to sell were a little too worried to wait for more opportune levels, so they chose to step in front of the crowds. 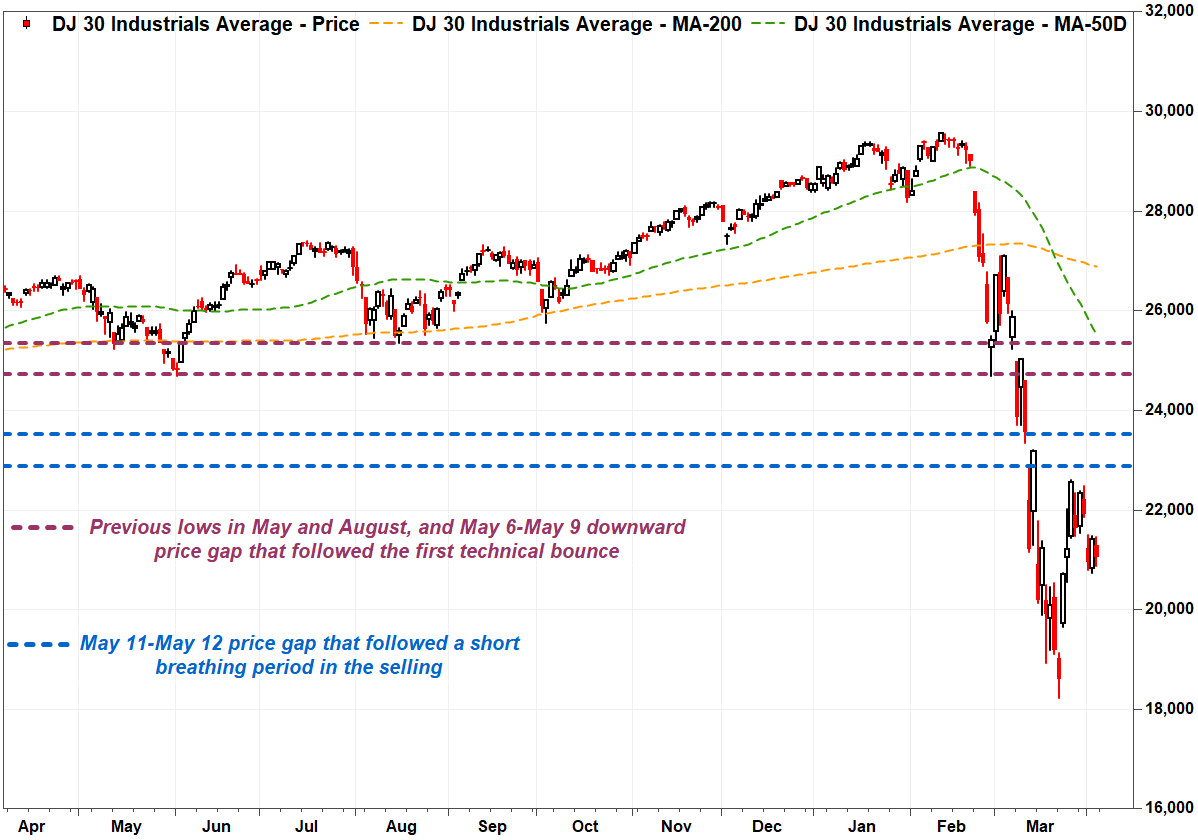 So what happens if the Dow fails to test resistance, so it can help clear out some of those looking to sell? Then either the next wave of selling hits after the Dow falls below the March 23 low, or it hits fairly soon, even before the previous lows are broken, because sellers are too impatient to wait for the obvious sell level.