Home
Stocks
Market Extra: The stock market may bottom long before the coronavirus epidemic peaks, analysts say
Prev Article Next Article
This post was originally published on this site

How low can stock markets go?

While the stock market is typically a leading indicator of the economy — it tends to peak before the onset of an economic recession and bottom before an economic recovery — the unique nature of the ongoing COVID-19 epidemic has made forecasting an eventual stock-market recovery particularly difficult.

Despite the cascade of negative headlines as increased coronavirus testing capacity reveals the extent of the outbreak in the U.S., some analysts are arguing that the equity market may have already begun a bottoming process, and that equity prices are nearing their most attractive levels.

Jeff DeGraaf, founder and chairman of Renaissance Macro Research wrote in a Thursday note to clients that he sees evidence of investor sentiment reaching such low levels as to be a contrarian indicator that points to attractive equity returns over the next three months.

As the chart below shows, investor sentiment, according to an Investors Intelligence survey, has fallen into the bottom 10th percentile of readings, which has been a good indicator of market rallies during the past decade. 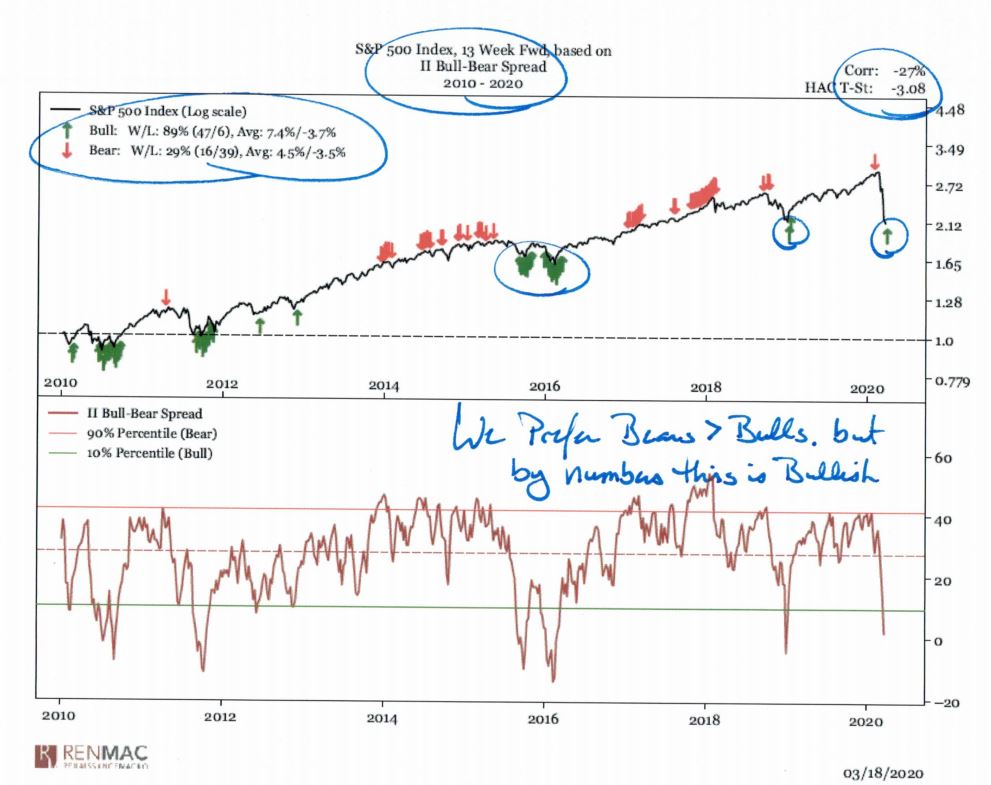 “If we could add an anecdote, an emotional portfolio manager pleading on TV for what amounts to martial law reinforces the extreme in sentiment data we’re quantifying,” DeGraaf wrote, referring to a widely viewed interview of hedge fund manager Bill Ackman on CNBC Tuesday.

“Truthfully, we see the viral count as a side‐show at this point, and the market’s main attraction being credit conditions and the ability of the Fed and global central banks to get in front of these deteriorating conditions,” he added.

Central banks around the world have announced a variety of stimulus measures aimed at combating the economic impact of the epidemic, though many investors and analysts have called for the U.S. government to create a lending program that would keep sound businesses afloat until extreme measures to combat the spread of the virus are no longer necessary and somewhat more normal economic activity can resume.

If the federal government can halt the panic in corporate credit markets, DeGraff argued, that could create a turning point in the stock market even if the health crisis continues to linger. “The viral news is likely to be bad when the market finds its footing.”

Another reason to believe that the equity market may be nearing its nadir are dynamics in the government bond market. James Paulsen, chief investment strategist at the Leuthold Group pointed out in a Wednesday note that the recent rise in the yield on the 10-year U.S. Treasury note TMUBMUSD10Y, -10.04%, from about 0.6% Monday to roughly 1.1% Thursday could be a bullish sign for stocks.

He noted that significant stock-market declines in 1987, 1998, 2002 and 2008 were preceded by marked increases in bond yields. “In each of these financial crises, both the stock market and bond yields eventually suffered sizeable and sharp declines,” he wrote. “Thereafter, however, once bond yields posted a meaningful advance, in every case the bear market was nearing its end.” 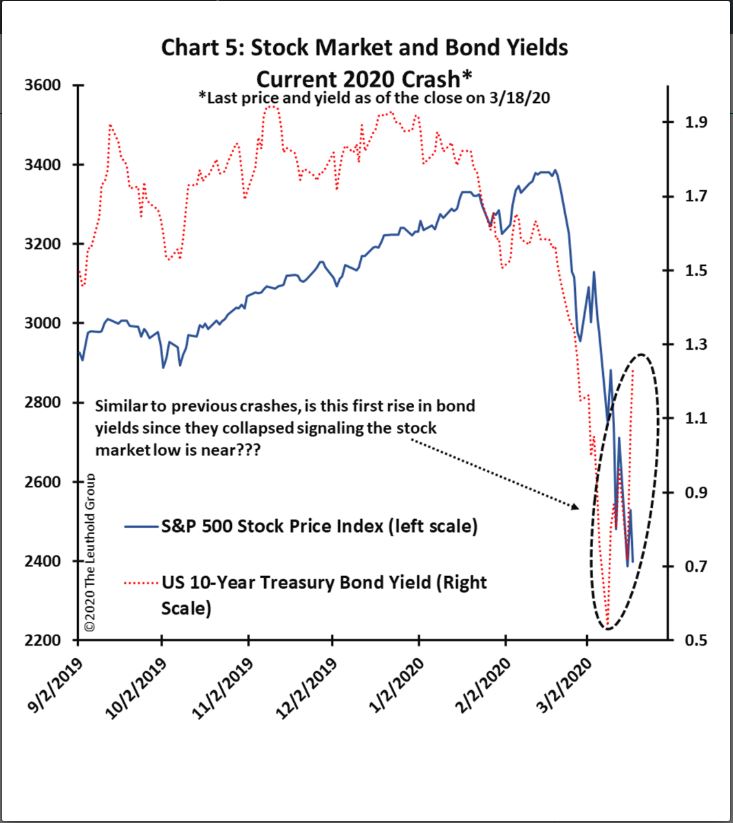 The unprecedented nature of the current economic virus, however, may make previous examples of market turnarounds less applicable. Julian Emanuel, chief equity and derivative strategist at BTIG is also is predicting quick economic rebound in the third quarter of this year, following a 9% decline in GDP growth in the second quarter, in part because in two of the previous three instances when GDP fell by more than 8% in a given quarter, it resulted in a pronounced snap-back in growth.

The outlier, however, was 2008, and the depth and length of that downturn could actually be a better model, especially if governments aren’t able to contain the economic fallout of efforts to contain COVID-19. In that case, growth following the massive 8.3% decline in output in the fourth quarter of 2008 continued to be negative for two more quarters, while the S&P 500 fell another 26.2%.

“The Fed (and soon the Treasury, after Congress’ mandate) is using all its tools to make sure that, unlike 2008, the public health crisis and economic crisis don not morph into a financial crisis,” Emanuel said. “Success means growth returns in the second half of 2020.”